Known for his expansion of The Spanish Empire and his patronage of The Arts, Philip was born Valladolid, Spain. He was married into a “political marriage” with Elisabeth of France. Neither appears to have cared for one another – outside of their “Royal duties” to produce heirs. Having 7 children (only one was a boy, and he died at 16). Philip lost his Queen a year later. He remarried (of his choice). Again having 5 more children – this time he had another boy (but his constant health problems made a strong heir unlikely). Philip was noted for his decadent lifestyle in Court.

He held enormous banquets and parties. Some feel that the eventual death of his Son by his second marriage (by smallpox), was due to his weakened condition brought about by allowing his some to drink to excess at Philip's well known “parties”. Some historians argue that Philip was more even tempered and his “parties” were not unlike many European Monarchs who entertained a “lively” lifestyle. His “gatherings” were instrumental in establishing the much needed diplomatic connections he needed to advance his Kingdom. Some also say that his early “fast lifestyle” would led him to a more pious one in later years.Philip became embroiled in The Thirty Years Wars (which took up most of this later reign). Becoming allied to Emperor Ferdinand II, Philip spend vast amounts of monies to finance and raise Armies.

By the 1620s, Spain's military was no longer the force it was. Philip had one of his daughters to marry into French Royalty (Louis XIV), as a way to shore up needed support for his weakened military (made so due to The Thirty Years War). It was at this time, Philip switch his attention away from his land forces and more to building up his Navy – The Armada. However, Spanish debt was now well out of control. Spain was in a state of bankruptcy in 1628 (made more so by the loss of a large New World treasure Fleet to The Dutch). Although Philip shored up what he could, Spain was truly finished as a major European power.Spending his last years refining Catholic practices within his country, he was nothing of what he was like when young. He spend much of his time in contemplative prayer. He died at age 60 in 1665. 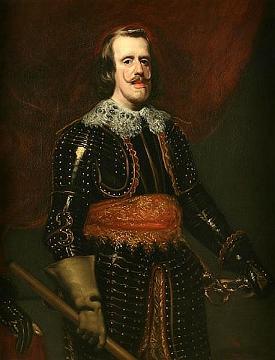