The Pharanoic Crown of Ancient Egypt, was based on the combination of two Royal Crowns. Egypt – prior to the establishment of The One Ruler System  (2,500 BC), Egypt was two separate Kingdoms with multiple Pharaohs. These Kingdoms were Upper and Lower Egypt. The Pharaoh of Lower Egypt wore a Crown called The Deshret. Painted Red or Ochre, it was also known as “The Red Crown”. It was a circular headpiece with the Crown exposed. A long extension rose up the rear of The Crown. The Pharaoh of The Kingdom of Upper Egypt wore a Crown called The Hadjet. This was a form fitting headpiece that was conical in design, and slopped slightly forward. The Hedjet was always White in color.

When Upper and Lower Egypt unified into a single Kingdom with one Ruler, both Crowns were combined to form The Pschent. The Deshret was worn first with The Hedjet following. In addition, the image of a Cobra and Vulture were added to the front of The Pschent (symbolizing Power and Life). The first Pharaoh to wear The Pschent was Menes. It was normally only worn for official State Functions and Religious Ceremonies. A Pharaoh was not buried in The Pharanoic Crown. 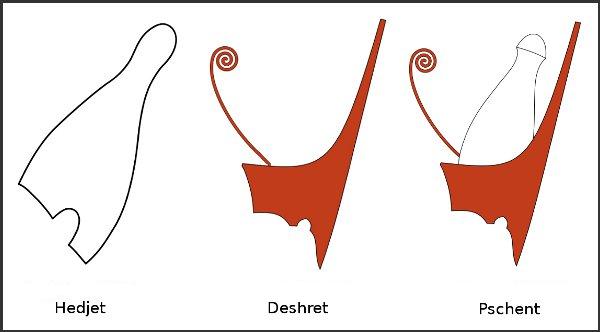