The Roman Phalera were awards given to any Roman soldier (including officers) - who distinguished themselves for certain actions in combat. The actions may be lessor to merit a higher award (such as The Armillia or a Crown). Designed on the similar medallion disk awards mounted on the Signum. These were smaller brass or bronze disks. They could be worn with everyday uniforms. Suspended on the uniform by leather straps (threaded through holes punched through the disks. A special harness was eventually designed to wear multiple awards. The harness was worn on the chest. All branches of the Roman military were eligible to wear these awards. 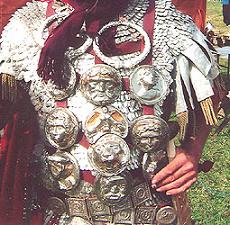