Persian Cavalry was normally better protected than the standard Infantryman. Close to The Byzantine Cataphracts, A typical Persian Horseman considered a “Heavy”, wore a Chain Mail undershirt with long sleeves. His trousers were heavy padded linen. A heavier (but similar designed), 4-piece Front, Side and Back Plate system was used as well. Strapped on by leather straps, A heavy Neck Gorget or Cowl was used for the neck. Often, heavy Enclosed Conical Helmets (with poor visibility) – were used.

Lighter Cavalry used the Khula-Khud Helmet with Mail. The Heavy Cavalryman had his legs protected by segmented and heavy plated of thigh and lower leg Armor. A rounded form of Sabaton (shoe) was also used. The major drawback of the Leg Armor was it only protected the front (with little protection to the rear and partial side). This made them vulnerable to Horseman Picks and various Polearms.

Often the Cavalry Horse was likewise armored. As stated, Persian's borrowed from Byzantium Cataphract Units (with regards to how they protected their Cavalry steeds). However, The Persian Units used a less heavier metal plating (that was somewhat more form-fitting to the animal). Additionally, the Horse metal “cowl” was not as long around the animals legs. This (while lacking in protection), gave the animal it's normal range and motion abilities. 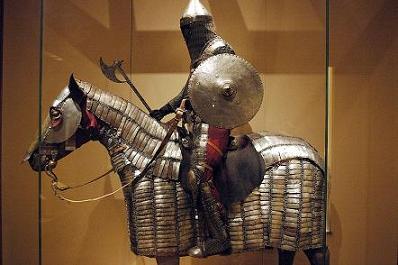