The Achaemenid (Persian) Empire  (550-330 BC), was a vast Region which maintained a massive Army (which, like Rome - was acquired through conquest). The "Elite" of this was the so-called "Immortals". For all their alledged "mysticism" and acts of "super human" qualities made more so by Hollywood Films, very little is known about them. Even their name is somewhat shrouded in mystery. The term "Immortals" was not a Persian term. It was given to them by Greek Historian Herodotus. More than likely, they were called (as many Elite Units associated with Royalty were then) - "Companions".

What little is known about them is that they were originally Palace Guards to The Kings of Persia. This relationship probably existed for hundreds of years. Later, when Persia "went to War", they followed their King into battle. No doubt highly trained and disciplined Soldiers, they were afforded only the best of weapons and supplies, due to this status. In times of relatively "peaceful" times, it is speculated that they served as Persia's Standing Army.

Their numbers were rigidly fixed at no more than 10,000-Men. This was with good reason and bodes to their nickname. As their fighting style was aggressive as Heavy Infantry, their goal was to break through an Enemies fixed Positions. Naturally, they achieved heavy casualties. As an Immortal was killed or mortally wounded, another would quickly take his place. This gave the impression that The United did not retire in battle as another would with heavy casualties. Thus, the name "Immortal".

What little is known of their Uniforms and Equipment is taken from stone carvings, and later from Centuries of myth. They no doubt wire the tradition long Persian Robe. These were possibly in "bright colors", to enable them to "stand out" in battle. They would have worn The Persian "Tiara", a circular Headpiece traditional to Persian Men. These were made from hard wood or even Ivory. An attached inner cloth cap was affixed to allow it to remain stationary on combat. Some early depictions have Immortals wearing a type of "Sword Sash". Shields, ranging from 5 to 6-feet in length, were made from reinforced layers of wicker wood.

Amother explanation for their "Immortal" nickname is that they did wear Plated Armor underneath their Robes. Concealed, a Soldier could recieve multiple Sword slashes and "apoear" unscathed. Normally, they carried a 6 to 8-foot Spear. Some used Swords, Bow and Arrow and Sling. Common Soldiers were identified by Silver counter-balances, while Officers used Gold.

Immortals were supplied by dedicated Caravans which carried extra weapons and food. They were expected to be relatively self-sufficient. Although The Immortals faded from use with the collapse of The Achaemenid Empire, their name would go one for Centuries. They are often confused with The Byzantine "Immortals" of the 10th Century (who were no doubt named and created in their honor). 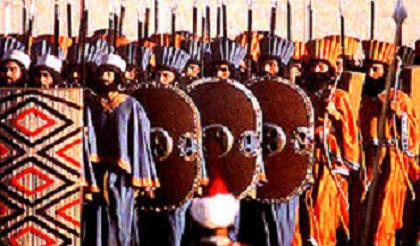