The ''Perioeci'' was a Class of ''Non-Citizen'' common to both Ancient Sparta (Laconia) and Messenia (A Territory under Spartan Authority). Their ''name is translated to mean ''Those Who Dwell Nearby''. Some Historians link them to the even more Ancient Dorians. The Periocei held a particularly unusual role within Spartan Culture. Their primary goal was to in essence ''run'' and ''maintain'' The Spartan Economy. Although monitored by Overlords of Spartan ''Natural'' Birth, they were given great berth in regards to their actions. They were free to travel (trade, etc.) outside of Sparta and Messenia without any restrictions. While they would be considered ''Slaves'' by some in The Ancient World, The Periocei were treated almost as equals.

Craftsmen, Artisans and other functions provided – The Perioeci were also responsible for the manufacture of the legendary weapons and armor of The Spartans. Their craftsmanship was widely known throughout the other Greek City States.

They were also afforded the responsibility to supply amounts of Men to serve in The Spartan Army, but only in a Reserve or Auxiliary role. At best, they could be deployed as Flankers with the Main Spartan Army. At least, they would guard Spartan Ports and Cities – thus allowing the bulk of The Spartan Army to fight unrestricted. 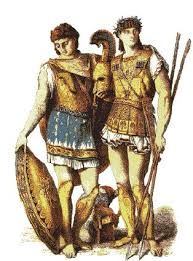