Seen in the late 18th Century and remaining popular until the mid-19th Century, Pepperbox Pistols were part of the Volley Gun family of weapons. Similar in appearance with a pepper grinder (hence their name), they were designed to be concealed upon a person. Their ability to yield multiple rounds made them a deadly form of self-protection. Initially flintlock and then converted into percussion guns, some versions discharged all their shot at once. Some featured the innovation of revolving barrel systems. By the 1830s, Pepperboxes were seen in every facet of life. Often popular with criminals, they saw very limited service in the military (due to the closeness needed to be effective). Some soldiers purchased and carried them as backup weapons. Calibers ranged from .32 up to an impressive .40 caliber shot. 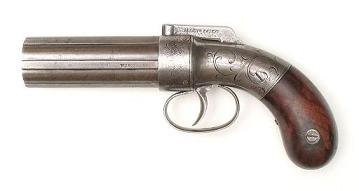