Pepin III was born in 714 A.D. Due to his slight stature, he was nicknamed “Pepin The Short”. He was the Son of the “Great Protector of Europe” - Charles Martel. Most importantly, he would be the father of Emperor Charlemagne. Pepin is considered the “first” Carolingian King of The Frankish Peoples (ruling from 751 A.D. Until 768 A.D.) He expanded the borders of The Frankish Kingdom and was the first to form an alliance “New” Rome. This event would change the shape of The Papacy and The Frankish Kingdom. In 741 A.D. Pepin and his older brother Carloman succeeded and inherited the title of “Mayor of The Palace – from their father, Charles Martel (who was given this title for his actions at defeating The Muslim Invaders to Spain). However, Pepin (who ruled over Neustria, Burgundy and Provence) – while his brother ruled Austrasia and Thuringia, were already incorporating such titles as “Duke and Prince of The Franks”, (which bore more of a “Regal” claim). To ease the growing concerns of other Frankish Leaders (who feared the ever growing popularity and power of the brothers), the two “elected” a “puppet ruler” they could control (Childeric III). However, most everyone knew where the “real” power lay.

In 747 A.D. Carloman (for some unspecified reason) grew tire of the “politics” of Court life and retired to a monastery in Monte Carlo – to live the life of a Monk. This gap gave Pepin the impetus to declare himself “King of All Franks”. To placate a much need “Roman Approval”, he sent emissaries to Pope Zacharias I. This Pope approved of the move and (facing civil war or abdication) – Childeric I stepped down). In 751 A.D. Pepin “declared” himself King formally. The Monk Bonaface (acting as The Pope's Representative), anointed Pepin – making him the first Papal appointed King of The Franks.

A new Pope in 753 A.D. (Stephen II), wished to be free of Byzantine and Lombardy influences. He called on Pepin for help (after being ousted from Rome by a Lombard Invasion). Visiting Pepin, he anointed his Son, Charles (soon be be known as Charlemagne). It was declared that from that day forward, no King could sit upon the throne that did not have the direct linage of Pepin. The ancient title of “Patrician of The Romans” was also given to Pepin.

Pepin (grateful), gathered his Armies and headed straight for The Lombards in Italy. After several years of heated battles (victories and losses), Pepin chased out Lombardy influences and carved a large land tract out of Central Italy for The Pope. Known as “The Donation of Pepin”, these lands would eventually evolve into “The Papal States” (and would remain as such until the 19th Century). When Pepin died (of old age in 768 A.D.) - his legacy would be passed down to (and even greatly more enlarged by his Son – Charlemagne). He would bear the title “Holy Roman Emperor”. 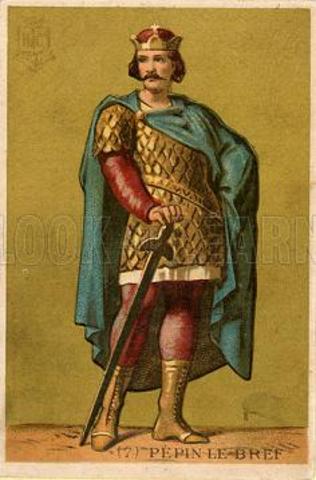