The style of Pendilia is related to embellishments found on various forms of Crowns worn by early Medieval Rulers. Mosaics and Murals as far back as the 5th Century AD – show Pendila. In design, these were metal extensions which came down from the base of a King or Queen’s Crown. These would hang in various patterns, often covering some or all of the face. At the ends of The Pendilia was often precious jewels or icons relative to The Monarch’s rule.

The length of The Pendilia extensions and Pendants attached were a matter of taste. In some cases, it was a female Ruler who had their faces covered by The Pendilia. In theory, a Subject was not allowed to gaze directly into a Rulers face. This was in part to their perceived “divine” descent. As such, The Pendilia was a feature in most Orthodox religious Art as well.

The style of Pendilia usage was very popular in The Byzantine Empire and was even known to exist in Turkish Culture. By the 11th Century however, most examples had ceased to be used. 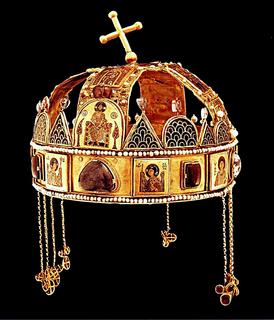