The initial War Shield (Armor) used by many Greek City-States (before the previously discussed Apis Shield), The Pelta were made of wood. Framed in a circular or semi-circular shape, animal hides would cut and shaped. “Stiffened” with animal fat “glue”, The Pelta was very strong and could withstand both battering and cuts. Water was a problem. Constant exposure to water weakened the glue. Experimentation with strips of animal sinew were used as well. There were 2 types of Pelta Shield used. A “Smaller” version with a 3-foot diameter width and a “Larger” one roughly 5-feet long and 3-feet in diameter. Smaller versions were often deployed with Cavalry or Light Assault Troops, whereas the Larger was used by Heavy Cavalry and “Shock” Troops. Further experiments with the upper Field of the Shield (with respects to an indentation) – were made for the Shield Interlock Tactic. Later, light bronze plating was attached, followed by the implementation of the more robust (and heavier) – Apis Shield. 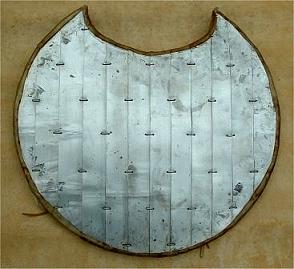