The Pelpos was the standard Feminine dress style of Ancient Greek women, dating to 500 BC (with variants much older). The style was used by both wealthy and common women, with materials being the most common difference. A long fabric, The Pelpos was a sewn elongated piece which was tubular in shape. Extending to the feet, the upper excess material was fastened over either right or left shoulder by ties or broaches. Excess material was sometime draped over the arm of The Wearer. Later versions would later remove the longer carried extension. Color was achieved thru a dying process, with basic and often vibrant colors created for wear. Most Pelpos were plain or devoid of embellishments. Royalty was known to apply countercolor variants to the hems, sleeves and necks on occasions.

Although the basic goal of The Pelpos was to conceal a Woman’s body from view (which was a cultural marker for married women), younger or unmarried Girls often wore Pelpos with side slits on the garments sides, which showed the maximum amount of “thigh” or leg. This somewhat “scandalous” fashion style was popular with Spartan Women. Most Greek Woman made (or had made) their Pelpos in both a lighter (or Summer) material and a heavier (Winter) style. The Pelpos was also cinched at the wait through design ot by a simple cloth belt. The Pelpos would remain the standard dress for Centuries and inspired much of the later Roman and Byzantine fashion. 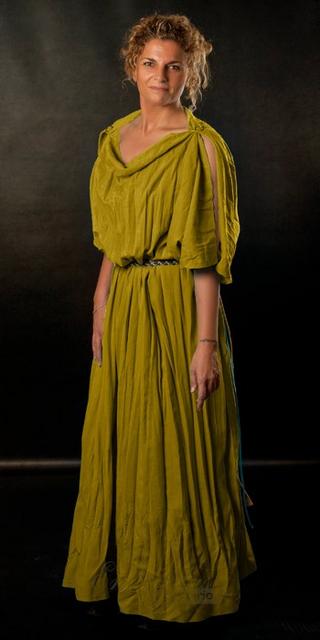