As we have discussed, Robes were a form of clothing highly prized in English Middle Ages. Made of fine cloths (in Summer) and warming animal hides or furs for Winter, they were often given as Peerage gifts to worthy Noblemen within a King or Queen's Court. In time, Robes were also associated with specific Titles and Appointments given by Royalty. Hence the term – ''Peerage Robe'' was born. Much as with The Livery Collar, which was a symbol of Office (specialized jewelry worn about the neck), Peerage Robes were designed to specifically identify a Royal Office. Color, style etc. greatly differed. By the 15th Century however, a more standardized design and type were made official. Only slight variances were created to identify various Ranks or Title.

The basic color Red was chosen as the color of most Peerage Robes. The Red was seen as the Color of Royalty, and as such Offices were of Royal Appointment – the color was so authorized. Variants of different White and Yellow or Gold patterns and designs were also incorporated – depending of The Office or Royal opinion. These variants may be the difference in the layers of fur or it's placement on the garment. In formal ceremony, British Government Officials (Parliament) are required to wear their Peerage Robes. Female Nobility also have a form, known as Peeresses. 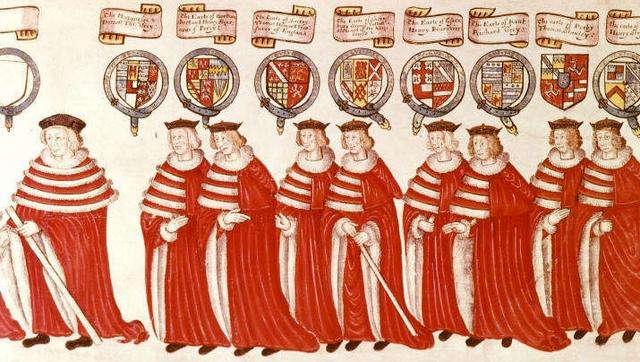