These were small fortified Keeps with attached Towers. They were built along the Scotland-England border. They were designed to serve as both Watch and Signal Towers (to locally warn of an approaching enemy army or related danger). By Law, an iron basket was required to be burning 24-hours a day. A local Lord and his family often lived in the Keep. Locals would live outside and around the structure in small dwellings. All were allowed to take refuge inside in case of danger or attack. Normally, no defensive perimeter wall structures were built around these structures. By the mid-1400s, many of these structures were constructed. Peel Towers were not generally built near urban areas (which relied on more traditional defensive structures). Also, many Churches and Cathedrals were constructed near Peel Towers (which were also centers of commerce). Although most have been lost to time, several examples have been preserved. 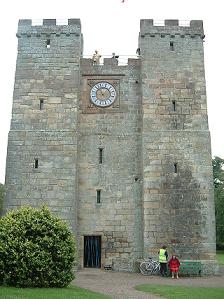