Gilbert was truly one of the last of the “classical” Pirates still left by the beginning of the 19th Century. Born in 1800 in Catalonia (a Protectorate of Spain), Gilbert started out as a Privateer for The Colombian Government. His primary vessel The “Panda”, was well known to American shipping and commerce in the region. Gilbert began to prey on the Coasts of the then “young” United States, taking many ships off of Florida. The American “Navy” was still to small to effect any real protection against Gilbert. He eventually left the American Coast and headed for Africa (possibly after the few Slave Ships still in legal operation). After 2 years of successful raids, Gilbert and his crew were eventually captured by 2 Royal Naval Ships. America made request of England in 1835 for extradition of Gilbert and some of his crew. England complied and delivered Gilbert to Boston (MA/US). Tried as Pirates responsible for thousands of dollars of damage to US shipping, Gilbert and his men were executed (hung) in June, 1835. Oddly, The “Gilbert's Bar” is listed on navigational maps today. It is a natural sandbar (off the Coast of Florida), Gilbert and his crews would use to lure and beach ships on. 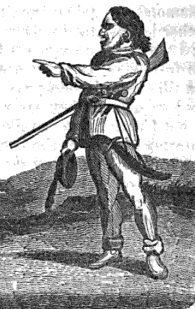