The ideal of The Landship actually developed at the turn of the 19th/20th Centuries. The theory was to combine both a Ship with an all-terrain vessel. When armored tracked vehicles were developed around 1915, the two ideas came together, in the form of The Landship. Massive in scale, the original prototype was 40 feet long, 18 feet wide and 20 feet tall. Constructed out of steel plating, it was akin to a giant Locomotive. Propelled by two massive tracks, The Pedrail was composed of sections. The turning radius of the vessel was 65 feet (which was a problem). It had very little suspension, and the "ride" was no doubt uncomfortable.

In theory, The Pedrail was supposed to safety navigate over any type of Trench configuration. Having the proposed ability to transport an entire Company of soldiers, multiple Artillery, Tanks (even Aircraft), The Pedrail was supposed to move entire assets quickly to The Front. Said to have a maximum speed of 45 mph, The Pedrail became too expensive to produce and field. One smaller prototype was manufactured in 1917 which featured a 12 Pound Gun. It featured twin 100 HP Rolls Royse Engines and weighted 32 tons. It was of capable of 12 mph by this time. The prototype was never used in combat. It remained more or less a derelict until it was broken up on 1923. 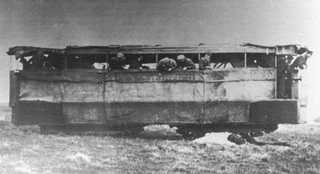