These two policies were created by The Catholic Church in the 10th Century. Both had an enormous effect of Medieval Society. The Church was not above using military force to accomplish it's ends in the Early Middle Ages. The policy of “Peace of God” meant that all men were required to take an Oath stating that they would not attack or otherwise harm Church property or persons of The Church (Priests, Nuns, Monks, etc). Further, all farmlands, livestock and related equipment were like wise protected. Should an enemy violate this protocol, such Adherents (Oath), were bound by same to “defend The Church” - regardless of one's personal opinion. This readily gave The Church a “standing Army” whenever it needed one. The policy of the “Truce of God” regulated that battle (or attacks) could not be engaged on certain Holy Days or religious Days of Obligation. Violation of same meant the inception of The Papal Army (of which the local Lord was expected to equip out of their own expense – in the Name of God). Further, any enemies conquered, were likewise expected to take The Oath (and follow the same rules). The Policies would carry through (for the most part) until the 14th Century. 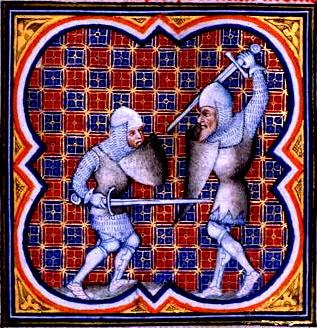