The Parma was a small round shield used by certain units in The Roman Army. It was around 36-inchesnin diameter, made of wood and had iron incorporated into it's frame for strength. The Parma had inside handles and a boss (metal protruding ball designed for weapons deflection). Seen in the early days of The Republic Period, they were popular among Velites (a lower infantry class). Roman cavalry preferred the Parma due to it's size and lightness. Often, the Parma was the only form of protection that could be used by the many Signifer Units of the Army. Examples of the Parma go back to ancient Greece and The Battle of Troy (1194 B.C.) . The Parma also saw "service" in the many Gladiatorial games of Rome as well. 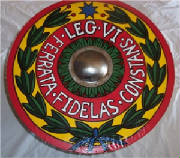