As we have seen, Ancient Rome heavily borrowed and adapted much from Trade Partners and conquered enemies. This was especially true of it's Military. Many of Rome's "classical" weapons were based on what they experienced on the battlefield from Foes. Such was the case with what Rome called The Parazonium Dagger Sword. The Iberia Peoples of Southern Spain were renowned in the Ancient World of the 3rd Century BC, as weapons makers. A unique sidearm made was The Iberian Dagger. Forged from iron, it wads a broad, triangular blade (resembling very much a modern Trowel). Shaped on both sides of the blade, a simple iron bar handle, was fitted with either a wood or polished bone grip. Ranging from 12-inches in length, it featured a broad width of 5 to 7-inches. The Iberian Blade wad very effective in cutting through leather armor, and could exploit seams and spaces on metal armor components. It was considered an extreme close combat weapon.

Upon Iberia's fall to Rome and instatement as a Provence, a variation of their blade was created. Known as The Parazonium, it was considered both Dagger and Sword. Worn by Officers or High Ranking Members of Government with prior Military Service, they ranged from 16 to 24-inches in blade length. Forged of one continuous piece of brass or iron composite, The Parazonium was noted for their "Predatory Bird" head shaped handle/pommel. The blades were also around 1.5-inches thick. Unlike The Pugio Dagger, (which some versions closely resembled The Iberian Models), The Parazonium was not necessarily considered a combat blade (but no doubt was used for self-defense). They were carried in scabbards. By the 5th Century BC, they began to disappear from use in the field and seem strictly as type of early "Presentation  Sword". 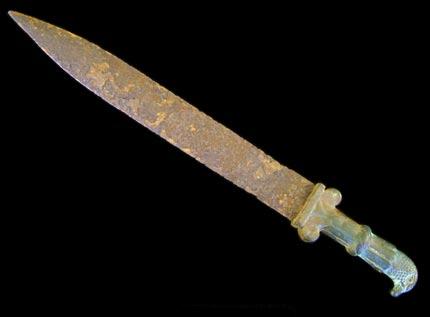