While the famed Papal Swiss Guardsmen in their iconic 16th Century Uniforms, are well known throughout The World, there was another Guard Unit employed by The Pope of Rome (Clement VIII) to protect The Vatican in Rome. These were Guardsmen (Mercenaries), taken from The Colony of Corsica. Numbering between 600 and 700 Men at their height, they served from 1603 to 1662.

The Corsican Guard also had military duties within the various Papal States (extending at one point well into Northern Italy). The Corsicans were somewhat poorly disciplines, and were well known for instigating many fights within Rome, with other Papal Military Units. The Guards (unlike other Papal Forces), were quartered outside of The Vatican (proper). However in 1662, many Corsican Units had overused their ''Papal Authority'' in commandeering foreign Embassy Military Quarters (for their own uses). This began to create ''diplomatic issues'' of which the newly installed Pope Alexander VII could no longer support.

The Corsican Guard got into a fight with French Embassy Soldiers (of which The Pope was courting for continued military and diplomatic support). The resulting rowe resulted int eh death of several French soldiers. The Pope immediately disbanded the long troublesome Guard. Several were bound over to the Civilian Magistrate, were they were hung. As a result, diplomatic relations between Corsica and The Vatican ceased (never to officially recover).

The Corsican Guard wore traditional Demi-Armor, as was the custom of the day. Mounted Units used Faulds, Greaves and Pauldron Armor as well. Rapiers and Straight Swords were the weapons of choice, with early Firearms becoming more and frequent. It is unclear if The Guard used early Artillery. 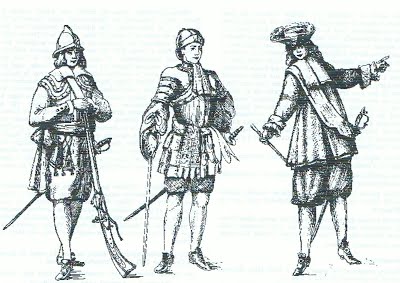