Deriving from the word “Pantry”, The Medieval Occupation known as The Pantler – was the responsible Party for the stocking and maintenance of a Castle or Manor Houses Food storage system. This was an important Position, whereas The Pantler ensured food was not spoiled and that a Pantry was always adequately stocked. The Pantler was seen as one of the most important positions in a Medieval Kitchen. Spoiled food lead to sickness and most often death (due to poor preservation practices).

The Pantler began to develop various methods to help in food preservation. Some of these methods included the use of preservative Spices and Salting. Pantlers also helped devise the much later used method of “Smoking” or Curing various Meats for preservation. Often given control over a Kitchen’s monetary assets, some Pantlers still turned to greed. Often buying cheap food to save money (for their own use) – many Pantlers ended up executed. In fact, most cases of poisoning (often blamed on fortune and position seeking Relatives), came from greedy or compromised Pantlers. With the eventual disuse of The Castle as a way of life, most Pantlers ceased as a Profession. In cases of Manor Houses and related, Cooks and Chiefs (and their Support Staff) became Pantlers in form. 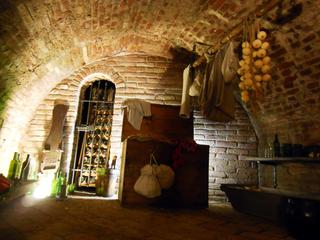