As we have seen with The Roman Sagum Cloak, worn mostly by Roman Legionaries, The Paludamentum was a form of Cloak used by Roman Military Officer and certain high placed Senators and related Roman Officials. However with The Civilian Class, these Cloaks were used to signify past Military Service (as a Legatus, Centurion etc). Seen in use in The Republican and later Imperial Eras, The Paludamentum was somewhat different from The Sagum (which was worn to the waist). Roughly 10 to 12 feet long and made of heavy linen or wool, it attached to an Officer’s Breastplate or Curiass from the rear or back. The excess material was most often draped over the shoulder or carried on the arm, much as the civilian Toga garment.

Red was the preferred color of The Legion, although some murals show darker hues (even Brown). In some stylized versions, The Emperor is shown wearing a Purple version (regardless of his lack of actual Military Service). A formal version colored White has also been shown in art as well. By The Imperial Era, The Paludamentum was reserved for wear only by The Emperor. Most Military Officers re-adapted The Sagum in a similar fashion. The Paludamentum was used as a way to help “warm” an Officer, by helping to cut down wind – which may penetrate his armor. 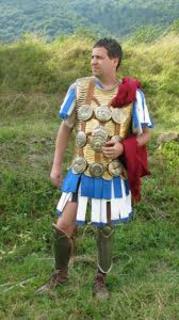