The Palfrey was a classification of Horse (and not a specified breed) that was highly prized during The Middle Ages. A Horse was considered an extremely valuable commodity, only afforded by Nobles and Royalty. It took great wealth to both breed and maintain such animals. The Horse was considered the ultimate form in transportation and Warmanship. The Palfrey was a lighter weighed breed of Horse, unlike the larger Plough and later Quarter Horses. As such, The Paltry was very nimble and could travel great distances. The Palfrey was most often used by Knights and was preferred over Jousting Horses (larger and more cumbersome). Palfrey’s were trotters and not galloping Horses, which gave them a faster Cantor when walking. As such, an Armored Knight could maintain better control over his mount. The Palfrey would evolve through effective breeding into The Cavalry Mounts of early Armies by the 15th Century. 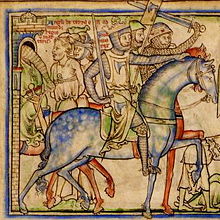