A ''Paedagogi'' was an educated Slave, who was purchased by a Roman Nobleman to educate His or Her Male Heirs (whereas Females were to be excluded). In The early 5th Century BC Roman Republic, Public Schools as by today's standards – did not exist. In order to form a ''proper'' and educated young Roman Boy, the Paedagogi was used to instruct in The Greek Language and Greek Writing. These were seen a a much higher Class of Roman Slave than most. They slept in the primary Residence, wore good clothing and ate very well. They also had a much more looser form of Slavery, in that they could be allowed to leave The Residence with their Master's or Mistress' permission. In some cases, they were also allowed to work other jobs for money (and not having to repay their Owners).

Most Paedagogi lived with a Family for many years and were often given their freedom as a ''retirement gift''. In other cases, after a Male Heir was properly educated, The Paedagogi was sold to another Family with similar needs. The more ''Higher Born'' The Noble Family was, the obviously better educated Paedagogi was sold at great price. Some Paedagogi were even placed in charge of other Slaves, and as such – a form of heirarchy within The Slaves existed. The Paedagogi Class of Slave could still be found by the end of The Republic in 27 BC. 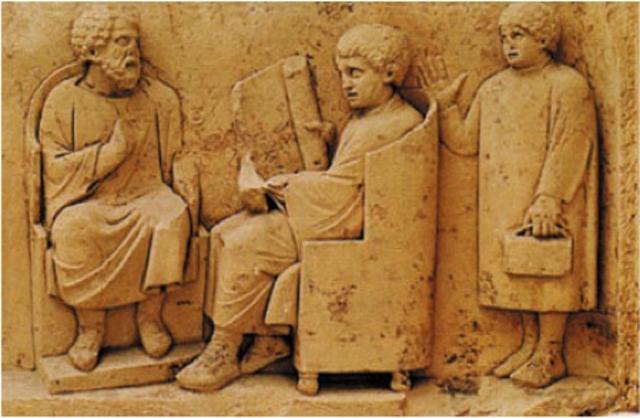