Located in Albufeira, Portugal, Paderne Castle is located on the site of an Ancient Roman Fort of the 2nd Century. The site was eventually taken by The Moors during their conquests around 713 AD, upon which they built one of the first permanent fortifications. Devising a string of defenses during their occupation, Paderne Castle was considered one of the strongest. During the Reconquista Period, the Forces of Sancho I took the Castle in 1189. The Moors countered in 1191, and retook the Castle. They held it a final time until 1248 - when Sancho II led an overwhelming Force and besieged Paderne. The resulting siege yielded the total slaughter of it's Moorish Garrison.Heavily renovated afterwards, Paderne Castle slowly began to lose it's strategic importance in Portugal's defense. Turned over to the Catholic Church, a large Chapel was erected in the 16th Century, but most of the original fortifications had badly deteriorated. In 1858, The Chapel was deactivated and the site fell into almost complete decay. In 2002, Portugal's Government began to systematically renovate Paderne Castle back to it's 15th Century state.Trapezoidal in shape, Paderne Castle features some surviving original 14th Century , 30 to 40 foot tall defensive walls. These walls were (and are) supported by 6 foot high mud walls for additional defense. The original "Roman Bridge" remains over a once Wet Moat, which provided access to the Castle. The Gatehouse still remains and is supported by an "L"-shaped Battlement (on the Eastern side). Up to 8 Defense Turret Towers of all design types exist. The towers served to protect the approaches to the Castle. They may have supported various anti-siege devices in the past. 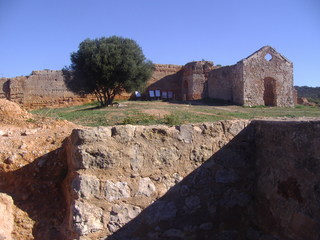