Termed as the outer defended enclosure of a Castle. Designed to protect the most important inner structures of a castle or fortification. Living Quarters, Stables and Weapons production facilities could be protected. Often referred to as a Base Court (in England), they were made of wooden (initially), which became stone later. In many cases, a Parish Chapel of a local village would be placed inside the Outer Bailey (villagers would seek out this structure for protection in times of war or attack). In some countries, the Outer Bailey was often protected by a Ring Wall structure or moat. As time progressed whole Market areas were placed/built inside. Another form was the Bailey's incorporation into the Hill Fort or Castle design. Baliey's would be constructed slightly higher that surrounding structures. This created the "Higher/Upper" Bailey and "Lower" Bailey designs. 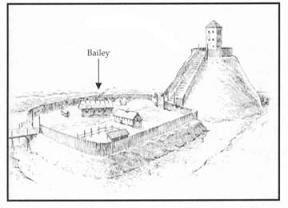