The Tabar or sometimes referred to as The Tabarzin, was a form of Battle Axe common in many Persian Nations. It was a common battle fixture with The Ottoman Armies of the 17th Century. Ir would migrate in design to several Central European Nations as well (Hungary, etc). There were various forms of The Tabar designed. Traditionally, The weapon featured a 7-foot long handle. These components were wood and later solid cast metal. The Tabar featured a crescent shaped Head which was recursive on both flanges. Having a smaller, flattened Rear Head, The Tabar normally featured no Spike or top end. The Head was cast in iron or fused metal composition. The Head Face was roughly 5-inches in width (with some slightly larger versions made as well).

By the 18th Century, The Tabar design was seen in heavy use by many Tribes in India. Variations such as The Tabar Shisbar developed. These forms featured not only the traditional Tabar Axe Head, but a Mace-like component at the end of the Axe Shaft. This created a multi-weapon design popular with Hindi Cavalrymen. The Ax Shafts for these Tabars were somewhat longer (around 8 to 10-feet in some cases). These Tabars were altered from their traditional design, with a Spiked Head or Knife-like point added to the Head. Even with the early advent of Firearms technology, The Tabar survived on the battlefield as a close quarters weapon, capable of cleaving through Mail and Cloth Armor. Various ceremonial Tabars also were used as Guard Weapons. 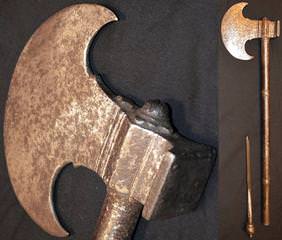