Not to be confused with The Basilick, this "Supergun" was built by The Ottoman Empire, possibly around 1450. Commissioned by Sultan Mehmed II, it was first used at The Siege of Constantinople (1453). Although it did not survive (and it's fate is unknown), it was documented (by both Turkish and Crusader accounts). It also was said to have only been functional for the 6-weeks it was deployed (before breaking down). It was said to be 25 feet long with a 2.5 foot bore diameter. It was also said to be able to fire a 1,200 pound shell 1 mile! Made of an unknown composite type metal (probably brass and iron), the weapon would produce so much heat after just one round, that gallons of olive oil needed to be poured over the barrel to cool it (water would have cracked it). It was said that it could only be fired 3 times a day. Mounted on a large wooden carriage a specially made "A" Frame was constructed to help lower the massive shells into the barrel. It may have taken up to 15 -20 men to operate this weapon. 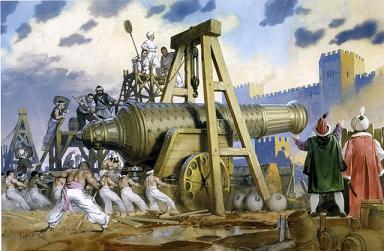