The Ottoman Akinji were Light Cavalry Troops which were used as a form of Melee Troops to harass and exploit am Enemy (normally Infantry). Considered “Irregular Cavalry”, they were unpaid and subsisted solely on “plundered spoils”. This often made The Akinji ruthless. Popular in the 15th Century, The Akinji were mostly used on The Frontier Territories. When they were brought into Front Line engagements with a large Army, they were equipped with now and arrow. They were Masters of the “Parthian Shot “ tactic. The Akjini were often confused with The Deli (or “Madmen” Cavalry. Tjuscwas due to their similar haphazard ways in combat. They were noted for their colorful uniforms of mis-matched hues. Thus was meant to cause confusion with an Enemy. They also used Sword and Spear. They were mostly recruited from Boyer and Tartan Tribes, seen as natural “Horse People”. The Akjini were disbanded with The Military Reforms of The Empire in the 19th Century. 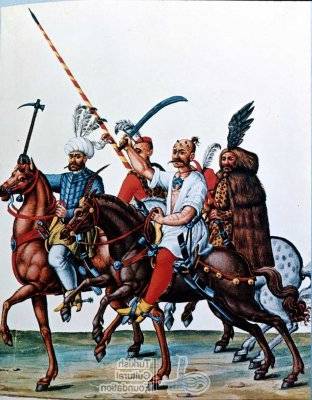