Order of The Ship

A brief Military Order of Knights, The Order of The Ship originated from The Kingdom of Naples and King Charles III in 1381. The Order of Noble Knights were very active in their defense of both the person of The King and The Kingdom during many internal Dynastic Wars challenging the Throne of Charles III. It is though that The Order were also Maritime Knights – hence their Title “of The Ship”. They may have simply had a small Navy at their disposal and used such for deployments. Charles III would be assassinated in 1386, with his Regnant Wife taking control of his Kingdom. The Order disbanded with many believing that they would not support her due to her possible complacency in The late King’s murder. A Golden Ship was used as their insignia with their Mantle being Red on the outside and Green on the inside. 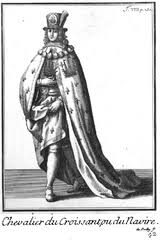