Order of The Knights of St. Lazarus

The Ordo Militaris et Hospitalis Sancti Lazari or The Military and Hospitaller Order of St. Lazarus, was formed by Papal Authority in 1098. They were tasked with providing for the sick and injured (primarily Lepers). They operated a hospital in Jerusalem. Their Patron was St. Lazarus and solely the idea of The Brothers of St. Lazarus (a religious Order). With Jerusalem under constant attacks, The Order militarized into a small but effective fighting force. They did not fight in as many Middle Eastern battles as other Orders, but when they did - they fought with distinction (and were often mentioned by other Military Orders). The Order had substantial land holdings in England, Scotland and Central Europe (losing most of it by multiple Ottoman incursions of the 14th/15th Centuries. In the mid-15th Century, The Order was merged with that of The Order of St. Maurice (Italy). They still retain their Order's motto and identity - still working today in Italian Heathcare system. 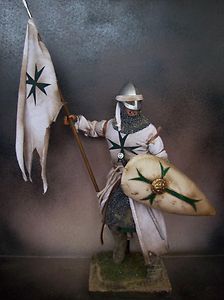