Order of The Knights of St. John Hospitaller

The Ordo Fraternita Hospitalarlia or The Order of St. John of Jerusalem - was founded by Fr. Gerard (a Benedictine Priest), in 1099. Their mission was to care for the sick, injured and poor who came to Jerusalem. Their Patron Saint was St. John The Baptist. Upon being granted a military charter by Papal Authority, they began to defend The Holy Land from "all enemies of Christ". They fought gallantly in The First Crusades. After the fall of Christian forces, The Order moved to Rhodes, Greece. The Knights fought in many battles there, most notably their defense of the Isle of Rhodes against an army of 100,000 Muslim Turks. The Order wore a brown mantle-apron with a large white Cross. This would change to a red Maltese Cross after The Holy Lands.

The Knights used the same rank structure as most Orders did - Knights, Sergeants, Squires and Chaplains. The Order was one of the first to used artillery when it became available. They were also well known builders of fortifications and castles in The Middle East - many of which still stand. The Order had substantial land holding throughout Europe - but lost most of it due to first, The Protestant Reformation and second - Napoleon Bonaparte. The Order was later moved to The Vatican in Rome were it ceased to be a military organization. The Order reverted back to it's original purpose of providing care for the sick and injured. The Order still exists today and uses it's ancient ranking system as well. 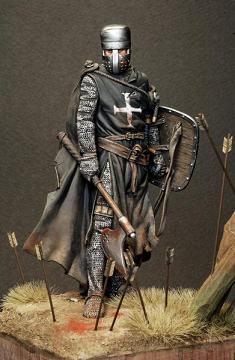