Order of The Knights of Calatrava

The Order of The Knights of Calatrava (aka Orden de Calatrava) were a militarized Order of The Cistercian Religious Rule. Created by Raymond of Fitero in Castile, Spain on 1187. Named for The Castillo de Calatrava la Nueva (an Arabian castle captured by Castlian Forces during The Crusades). They wore the white mantle-apron with an elongated center Red Cross. Having distinguished themselves against the Muslim Berbers in Morocco (at the cost of their castle), The Order went to fight against The Moors. Their luck went bad after the death of their Grand Master. With no true leadership, The Order almost was disbanded. With help of Pope Innocent III, The Order reconstituted and was sent to join The Iberian Crusades (fighting The Moors again).

With the coronation of King Alfonso X, The Order was almost sent to Jerusalem in 1272 (to liberate the city). Lack of interest in crusading by this time (by other Kingdoms), cancelled this plan. Although no longer fighting, The Orders prestige and wealth grew. At one time there were about 500 Knights, Squires and Chaplains. They garrisoned many castles and fortifications throughout Granada and Spain. The Orders wealth slowly began to cause it problems with The Pope in Rome. Feeling that they were too wealthy, various indictments were brought up against their Grand Masters. In addition, they fell prey to the many feuds between the King of Spain and Portugal. With neither side wanting to commit a standing army to yet another invasion of Granada in 1492, The Order was unable to stop them from taking control. The Order started to change, turning into more of an "assassination for hire" group than a Military Order (serving such for the King of Spain). By the 1650s, The Order had exhausted much of it's wealth and ceased to be a military unit. They converted to a solely religious group in the 1660s. By 1838, The Order completely disbanded. 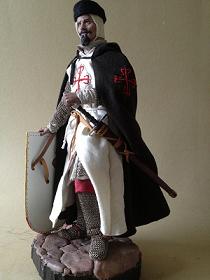