Order of The Holy Ghost

The ''Order of The Holy Ghost'' was a ''Lay'' (non-Ordained) Religious Order that was founded in the 12th Century AD – by Nobleman Guy de Montpellier. The Order originally was based in Provence (France), but would eventually move it's Headquarters to Rome, Italy. The primary goal of The Order was to care for the sick and dying. The Order was officially sanctioned by Pope Innocent III.

Maintaining Hospitals throughout The World, The Order of The Holy Ghost operated very much like The Order of St. John Hospitaller. Unlike that Order, The Holy Ghost did not participate in any of The Crusades, but did nurse those injured in The Wars – upon their return.

The ''good'' of The Order attracted many private funds from the wealthy of Europe. As such, The Order came under scrutiny regarding just how those funds were spent. Despite many accusations, The Catholic Church never uncovered graft or theft. By the 1600s however, much of The Order simply have ''died away'' (without new Recruits). Their funds had grown massive by this time.

Pope Sixtus IV re-organized The Order, naming them ''Knights of The Church'' and tasked them to support another Order (Our Lady of Mount Carmel). Some of The Holy Ghost Order's funds were diverted there to support Pensions for retired Soldiers who served in The Crusades.

The Pope also diverted funds into several Hospital for The ''Dangerously'' Insane, throughout Rome. Many of The newer Order would continue onward with Medical Careers, often returning to many of The Hospitals to volunteer their services. By 1783, much of The Order had again ''faded away''. The Church did not reconstitute them, although there are several sub-Orders today that claim linage.

The official symbol for The Order of The Holy Ghost (worn as an insignia on either a Black or White Cape), was a Black Field with a modified Orthodox (2-tier) Cross, in White. Later, the Order would change this to a White modified Doubled Maltese Cross. 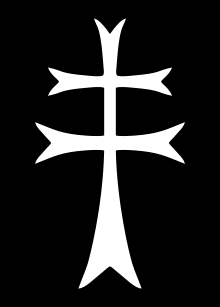