Order of The British Empire

A relatively “new” Order of Chivalry, The Order was created in England by King George V in 1917. The Order is awarded to BOTH Noble and Commoner alike. One of the largest Orders in England, it was originally designed to acknowledge the services of those who did not serve in World War I (but provided invaluable services to their Country during the same). The Structuring (Rank), consists of Knight Commanders, Knights, Dames, Commanders, Officers and Members. The Badge was originally a Medal with the image of King George V with a purple Ribboning. The color was changed to Rose Pink in 1937 with the Medal Reverse Motto being “For God and The Empire”. The Official Chapel of The Order is located at St. Paul's Cathedral in London. A series of stained-glass windows for each “Titled” Member outlines the “deed” they performed that led to their Award. If Royalty is awarded The Order, their Heraldry (in the form of a Banner), is also displayed. 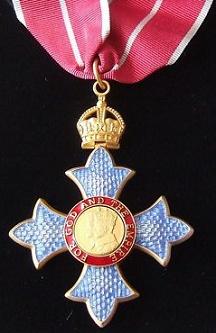