The Order of Teutonic Knights or The Order of Mary of The Germans in Jerusalem, was formed in 1190 to protect pilgrims enroute to The Holy Land. They also established hospitals to care for the sick. Their Patron Saint was The Virgin Mary. Given their authority at the request of Heinrich Bassenheim from The Pope in Rome (to commence military operations as a fighting Order). They were not a specifically large Order. When major campaigns were needed, The Order would often recruit mercenaries to fill their ranks. After the defeat of the Christians in The Second Crusades, they were sent to Hungary with the task of Christianizing the region. They were known for keeping much of the territory they captured. In this, The Order were considered Land Barons (which was a way to generate income).

The Order wore a white-mantle apron with a large Black Cross. As time progressed, the Cross was replaced with the Maltese Cross. Organized along the lines of most Orders of the day, The Order used Knights, Squires and Chaplains. Squires were not normally used as fighters. The Order was primarily a nobleman's organization, often having young and idealistic knights proving themselves in battle (before going on to bigger things).

The Teutonic Knights were fierce fighters and were among the first to use gunpowder and artillery in battle (when it became available). Unlike other military Orders, they also had sub-Orders (The Livonians and Estonian Order). These were regional off-branches. Napoleon Bonaparte officially disbanded The Order during his reign and seized much of their territories. Continuing as a psuedo-Military Order into 1929 - again mostly for the social elite and noble-class in many Germanic Nations.  Today The Order still exists, but only as a philanthropic organization. They still use the title of Knight. 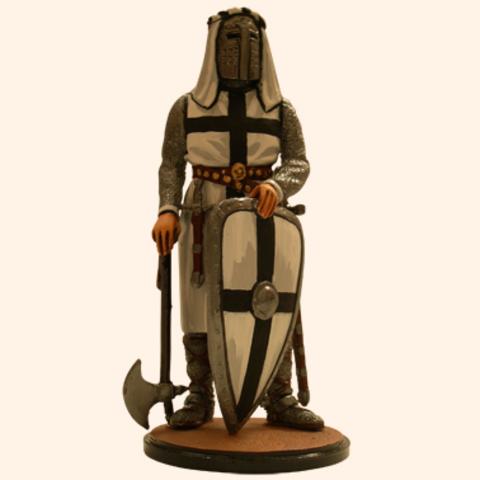