Order of Our Lady of Bethlehem

The Order of Our Lady of Bethlehem (Militae Ordo Nosdit Sancta Mariae Bethlehem), was founded in 1459 by Pope Pius II. With The Fall of Constantinople to The Turks (1453), The Pope needed to recruit a new military Order (most Orders were disbanded or otherwise engaged). Another of the "little known" Orders, The Knights of Our Lady wore the white mantle-apron with a simple Blue Cross. Little else is known of their makeup. They were known to accept candidates from any class (provided they followed The Orders vows). The Order was stationed on the Island of Lemnos (Greece), to protect it from any possible Moorish attack. The Pope gave control to The Order of all properties and goods from the defunct Order of St. Lazarus. The Moors attacked Lemnos and although they initially withstood the Moors, without reinforcements - the island fell. The Order suffered heavy casualties. Although The Pope praised and honored them, he did not reconstitute them. A religious Order surfaced in the 19th Century using The Orders name and insignia. They exist today as a philanthropic organization. 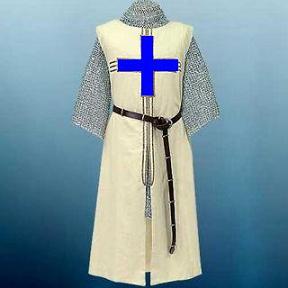