The Order of The Poor Fellow Soldiers of Christ of The Temple of Solomon, sometimes known as The Order of Solomon's Temple. They were commonly known as The Knights Templar. The Order was founded in 1129 and formally endorsed by The Catholic Church that same year.  Their mission was to protect the christian pilgrims traveling to The Holy Land. They pledged to do battle against all enemies of Christ. They were highly skilled and trained and some of the best fighters of The Crusades.  They were responsible for creating an economic and financial infrastructure throughout the Middle East and Europe. The first attempts at banking and credit were initiated by The Templars. They were also responsible for building man fortifications and castles throughout the Middle East, many which still stand today.

French knight Huges de Payens developed the idea for The Order after the First Crusades. The Order attracted many young and idealistic noblemen who wished to follow a religious order but retain their codes of Chivalry and battle.
Jerusalem (in particular the Al Aqsa Mosque) was chosen as Headquarters for The Order. The Mosque sat on the ruins of The Temple of Solomon. The Order reconsecrated it to The Church. The Order also embraced Bernard of Clairvaux as it's Patron Saint and protector. The Order was known for it's distinctive white apron-mantle worn by the Knights-class (it had to be worn at all times - save sleep). A characteristic red cross (representing the blood of Christ and martyrdom) was placed on the front and back.

There were three classifications of Templars. The Noble Knights-Class (who were the heavy cavalry), and afforded 3 to 4 horses, the best equipment and several Squires. Second, the Sergeant-Class (who were light cavalry), and were blacksmiths, weaponers, engineers and held most of the Administrative positions. They wore black or brown apron-mantles with the red cross. Finally, the Chaplains, who administered the religious needs of The Order (they were allowed to wear the white mantle).

The Order became very wealthy with regards to it's many financial ventures (probably more that The Pope in Rome). Towards the waning period of the end of The Crusades, The Pope decided to act against them (most of his reasons unjust and self-motivated). On Friday, October 13, 1307, he declared ALL Templars part of a heretic sect. He ordered their arrest, trials and executions. The Order was all but destroyed. The Templars were officially "pardoned" by The Catholic Church in the 20th Century - finding their persecution "unjust". The Order still exists today as a religious/philanthropic organization. They still retain the ancient customs of rank within the organization with regards to titles (Knights, Squires, etc). 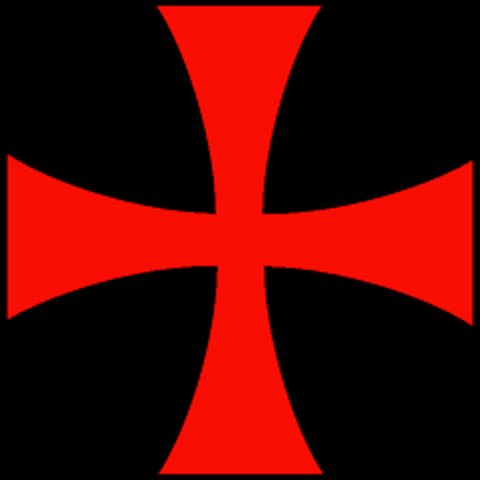