The Order of Dobrzyn (aka Orden von Dobrzn, Zakon Dobryznski of The Brother of Dobryzn) - were a military Order formed of Prussian/Germanic members in 1216. Given Papal Authority to wage "wage war and to protect Prussia from within and without". They fought against the Pagan population of the Region (in and around Prussia), during The Conversion Era. The Order was also tasked with the protection of the many monasteries within the Kingdom. They wore the white-mantle apron with a Red Sword and Star (symbolizing Christ dealing with all non-Christians). The Order was NOT a successful military organization. They were eventually merged into The Teutonic Order in 1235. They were allowed to retain their symbolism (similar to The Livonian Order). The last surviving member of The Order were captured during The Battle of Kiev (Russia), in 1240. Most documentation of The Order stops at that date. 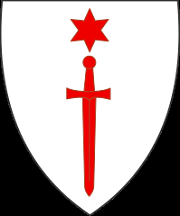