Order of Constantinian and St. James

The Order was "officially" founded in 1520 by brothers of The Angeli Comneni Family (Italy). Claiming a more "heroic origin", it was said that The Order could trace it's history back to service with Emperor Constantine (5th Century A.D.). Given Papal Authority by Pope Clement VIII, The Order was recognized by a vast number of Catholic Kings. They wore a light blue robe with their Red and Gold Chi Rho Cross on the front. The Order served in several military expeditions against The Ottoman Turks in Central Europe. Also a "religious" Order (made up of Catholic noblemen), they did not follow a strict Order. They were more political than most Orders - aligning themselves with The Duke of Parma. This would lead to their involvement in the abortive Parma-Austrian War of 1736 (which The Duke lost). In The 1740s, The Order split into two factions over Grand Mastership. Both "Orders" using the same name - became more religious at this time. Many attempts have been made to reunite the factions. Today the Major and Minor Order are both religious/philanthropic organizations. 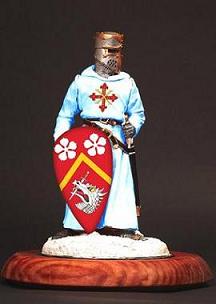