Opus Anglicanum was a type of English fine needle and embroidery style, popular from the 12th to 14th Centuries. England was well noted for it's fine needle work. Opus Anglicanum was much sought after throughout The Medieval World. Originally, The work was regulated to Vestments and other Religious apparel worn for Ritual and Ceremony within The Church. Such work was carried out by female members of specific Religious Order. Later however, the fine style was centered around London - where male craftsmen continued the Articles Form.

In design, Opus Anglicanus involved Linen or Silk Backing (called "Grounds" or "Groundings"). Gold and Silver wire was sewn into elaborate pictures depicting either "Old Testament" Bible images or representation of Jesus Christ's life or Passion. As these highly sought after pieces of embroidered Clothing became a mainstay in The Church and among only the most wealthy of Nobility and Royalty, other segments of Opus Anglicanum became known. Sewn Coverings for Bibles, Liturgical and Prayer Books were marketed. In addition, some of The Art was likewise applied to Altar Pieces.

With The Protestant Reformation,  much of this work was confiscated and destroyed, with the Gold and Silver thread (as well as pieces of previous stonework), taken. Some survived due to their use as Funerary Garments, remarkably surviving the rigors of The Grave. 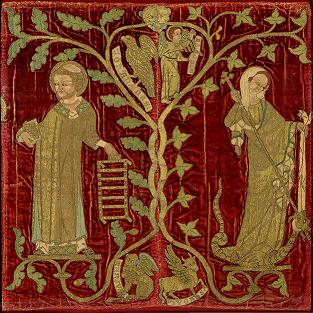