Operation: Teapot was a series of (14) Nuclear Tests that were conducted between February thru May, 1955. The Tests were performed at Frenchman and Yucca Flats – in The US State of Nevada. The primary goal of The Tests were to improve the overall performance of the then current US Military Nuclear Arsenal. Testing of the various Devices ranged from “Freefall” (or Aircraft release), “Ground” (Tower detonation) and “Sub-Surface” (below Ground detonation). The highest Warehead testes during Operation “Teapot” was in the 43-Kiloton range. “Teapot” was also used to test American Troop deployment and movements in a Nuclear landscape. Operation: “Wasp” was the code name for The US Army portion of The Test. Troops moved to a position of 3,000-feet from Ground Point Zero. The US Marine Corps. also trained in The Test (Operation: “Bee”). Another facet of The Test was the construction of what was called “The Japanese Village”, which was a series of simple structures built and arranged as a small Asian Town. The Test was used to test the effects of a Nuclear explosion on such building. Some of the structures survived the blast and can still be seen. 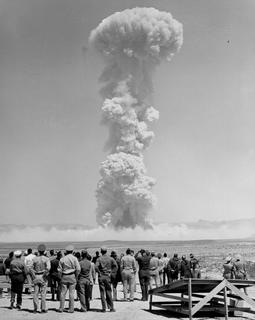