As early as 1954, US Government Forces of The Central Intelligence Agency (CIA), began to develop plans to conduct clandestine Missions against The Government of North Vietnam. The Plan, originally known as ''Operation Nautilus'', was to deploy South Vietnamese Army Commando Units and specially recruit espionage Agents into North Vietnam. Their goal was to gather intelligence about possible illegal incursions by that Government into South Vietnam. Later, just prior to the infamous ''Gulf of Tonkin'' Incident (which precipitated The Vietnam War) of 1964, US Military Special Operations (MAAG) took over operational control. Re-Coded as ''Operation 34A'', Forces raided a North Vietnamese Army Communications Site and claimed to have proof that NVA Naval Forces did in fact, attack The US Destroyer ''Maddox''. However, long after The War, NVA sources claimed that the information was falsified. Information gleaned by Operation 34A Forces, coupled with The ''Maddox'' Incident pushed US President LB Johnson into full commitment into Southeast Asia, starting in 1965. 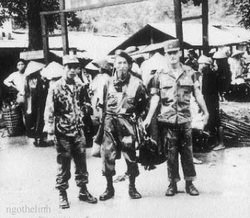