Born in France in 1688, he was nicknamed “La Buse” (“The Buzzard”). His fame in his “speed attacks” on his enemies were renown. Levasseur came from a wealthy family. Well educated, he served in The French Navy during The Spanish War of Succession (1714). After a year of service, he commissioned his own vessel and served as a Privateeer. Concentrating on The West African Coast, Levasseur took many prizes. He lost his right eye (now patched) – in a battle with a Spanish Slaver. Levasseur then turned into a full fledged “Pirate” - joining up with infamous Ben Hornigold and Howell Davis. He was said to have amassed close to 1 Billion (USD) in treasure and gold. Said to have hidden his treasures around the World, only one capable of breaking his personal Cypher could find it (which it never has been discovered). Captured by The French in 1730, Levasseur was hung. Many have tried for Centuries to break his “Code” and find his treasure. 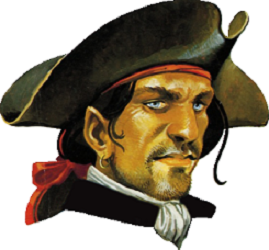