Also known as simply ''Betsy'', The ''Empress Dowager'' or it's more historically accurate name of The ''International Gun'', - She was an Artillery piece ''cobbled'' together from several other pieces. ''Betsy'' helped defend The Foreign Legation that was besieged in The City of Peking (Beijing), China – during The Boxer Rebellion of 1899-1901.

Pressed through several military defeats, a crumbling Qing Dynasty under The Empress Dowager, an Alliance of 6 European Nations, The United States and Imperial Japan established ''diplomatic'' and Trade concerns in Peking. With them came a heavy influx of ''Western Culture'' and religious views contrary to ancient Chinese customs. Unable to win a protracted war with Europe, The Empress supported local Militias comprising of peasants – known as The Boxers. A ''proper'' irregular Army of several hundred thousands, The Empress augmented them with her Imperial Army. Her Army was still militarily inferior, but it was though that sheer numbers would tip the scales in Her favor and oust the so-called ''8-Nation Alliance''.

Besieging The Foreign Legation, defended by a Civilian Army of 500 (European Civilian workers and Chinese Christians), the military arm of The Legation was only several hundred mostly garrisoned soldiers. These were supplied by each Country to their Legation for security. They had limited resources and abilities. Any fight would be one of attrition until relief forces came. The siege lasted roughly 55-days. As a result, ''Old Betsy'' was ''born''.

With no real artillery, the military commanders of The Legation came together with a haphazard plan. French soldiers had found an old French made cannon barrel from The Opium Wars of the 1850s. Reinforced with metal strips, it was placed on an old Italian sun carriage. The only ammunition were 9-pound Russian shells. The firing mechanism was inoperative, so a hammer with an attached firing pin was fashioned. Hence ''The International'' Gun can into being.

The Piece fired effectively and was used to slow The Boxer advance once they had scaled and later penetrated The Legation's perimeter walls. As a result, precious time was brought until relief forces arrived. ''Old Betsy'' was kept for a time at The British War Museum in England until it made it's way to The United States. Disassembled, ''Old Betsy'' is not on display. 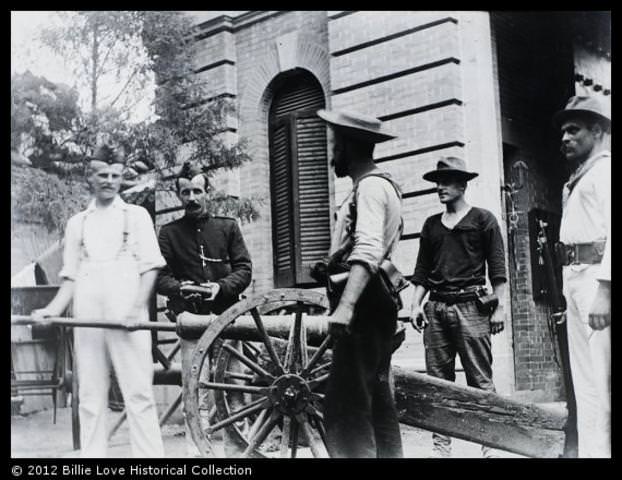