While animals have been used by Armies throughout time as War devices, in some instances, they have been kept by soldiers as pets. In this, long periods of tediousness – punctuated by the ''horrors'' of War, were often made more bearable. Even today, the practice continues. One such seldom told tale is that from The American Civil War of 1861-1865. It is the story of ''Old Abe'', an American Bald Eagle.

While much of Abe's story is shrouded in myth and fable, it was said that he was captured and kept as a pet by a Native American War Chief of The Ojibwe Tribe, hunting in Wisconsin. The Chief was approached one day by several White Hunters who were very impressed with the (now full grown and majestic bird). After a suitable trade, the Hunters had acquired The Eagle. As it was the year 1861 – and Civil War had been declared between The North and Southern Regions of America, many hopeful recruits began to leave Wisconsin to fight in The War.

One day, newly sworn in members of The 8th Wisconsin Infantry saw The Eagle at a Fort. Wishing the bird as a Regimental Pet, all ''chipped in'' and purchased The Bird for a sum of $2.50 USD. Everyone in The Regiment contributed. Further to honor the recent election of President Lincoln, they named the bird ''Old Abe''. The bird was trained to become used to the ''sounds of War'' (rifles, pistols etc).

The 8th Wisconsin was a Unit which participated in nearly every major battle of The Civil War in The Western Theater. Each time the Regiment went into battle, ''Old Abe'' accompanied them – tied to a special carry perch. Abe seemed to somewhat ''enjoy'' his ''front row seat'' to some of The War's most bloodiest battles. He was assigned an Orderly to care for him (which was considered a great hinor in The Regiment).

''Old Abe'' came into his legend at The Battle of Corinth, Mississippi in 1862. With The Regiment arrayed in line of battle, a thunderous volley of shot was released by Rebel Forces. As such, Abe's Orderly was shot dead, with The Bird being shot through his wing and tail. Neither wound was fatal to Abe. However, Abe was also cut free from his perch as a result of the shots fired. He began (according to legend), fly over The Federal Lines of battle. The sight of the might Bald Eagle was said to inspire Union Troops to hold their positions and win The Battle.

Abe continued on with his exploits through out The War – with his ''fame'' becoming known throughout The Nation. After The War, and the disbandment of The Regiment, Abe was taken in by The State of Wisconsin, who built him a special ''apartment'' in The Capital to live in. He was also afforded a lifelong Orderly to care for him. Abe was officially declared a ''War Relic''.

In 1881, a small fire broke out in The Capital. Abe was rescued, but he had ingested too much smoke. Although he appeared to seem to become somewhat better, he eventually died from the smoke inhalation. To further honor Old Abe, The State stuffed The Bird and placed it on display in The Wisconsin State Assembly Building. Abe attracted thousands of visitors each year.

In 1891, another fire completely destroyed The Assembly Building, and this time Old Abe. A replica was crafted though, and it sits overlooking The Assembly Main Hall. Of note, Old Abe would further serve to inspire another iconic piece of Military Americana. His visage was also used to represent The US Army 101st Airborne Division Patch. They are known throughout The World as ''The Screaming Eagles''. 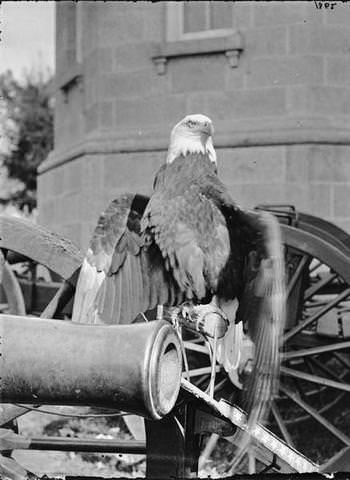