The Odrysian Empire existed from 480 BC until it's fall to Eastern Rome in 46 AD. Once part of The Perisan Empire under Darius I (5th Century BC), it was composed of 40 unified Tribes of Thracian origin. A total of 22 ''Kingdoms'' comprised it's Monarchy. Unusual in that The Odrysian had not set Capitol, many Historians liken this to a ''mobile'' King, who moved his Palace residence often, throughout His Empire. Much of modern Bulgaria and Romania now occupy the once Odrysian Empire (with satellite Colonies as far as Northern Greece and portions of Turkey). An advanced Culture for their time, The Odrysian too had to maintain a sizable and well trained Army, although much of this was for self-defense that aggressive colonization thru warfare. Much of their military training an style was based off their former ''Masters'', The Persians.

The Empire maintained an Infantry Class, but placed more emphasis on their Cavalry. These were composed of the Sons of Aristocratic Leaders within The Empire. It was considered a great honor to be selected. The Empire provided these Warriors their mounts and spent no expense on their weapons. Many Administrative Officials were culled from The Odrysian Cavalry. Armor (even Scaled or Maced) was seldom used, as speed was seen as the focal point of The Odrysian Cavalry. They wore brightly colored tunics and robes as their uniform. They did favor the Mycaenian patterned Comb Helmet, made of hammered Copper. Ranged weapons were seldom (if ever) used by Odrysian Cavalry (who saw the weapon as an Infantry type). They favored a Scythian-type Sword, roughly 3-feet (curved) in length. The handles of these, as we have seen were quite long (as mush as 16-inches). This allowed for better retention and ''swing'' from a mounted position.

Falling under Eastern Roman influence in the 4th Century AD (due to by then, much internal political corruption), much of the Imperial ''footprint'' had vanished by the 6th Century AD). 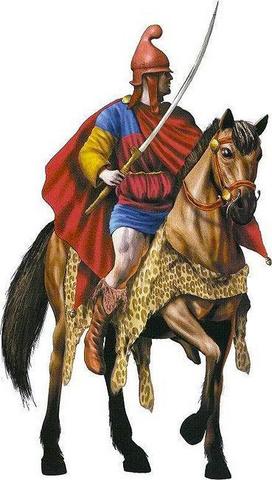