The Numidian Peoples were a sect of The Beavers Tribe, that inhabited Northern Africa and smaller portions of what would become Tunisia. Some of the first Commerce Traders and Allies from Africa to The Carthaginian Empire, The Numidian's were adept Horsemen. So comfortable on their mounts, that they used more saddles, bridles or reins. Only a simple rope lasso around their animals neck was used.

Quickly seen for their abilities, Carthage recruited their Allies as light Cavalrymen against Rome, during The Punic Wars of the 2nd Century BC. Numidian Cavalry (their preferred deployment), wore no Armor. They carried leather animal skin Shields and Javelibs. Thus freed from such weight. Numidian Cavalry were extremely fast and agile.

Their primary tactic, as reported by Roman Observers, was what came to be known as The "Cloud of Spears". In this, many Numidians threw their Javelins in a "mass" towards an Enemy. This had devastating effects, to be sure. They also became Masters of ambushing techniques. The Numidians greatly slowed Rome's advance into Northern Africa.

With all their skills, The Numidians could not slow the eventual deployment of Heavier (Armored), and better armed Cavalry. Later, with the Fall of Carthage to Rome, some Numidian Cavalry Units were even recruited into The Roman Army. They are credited with Rome's victory at The Battle of Zama in 202 BC. 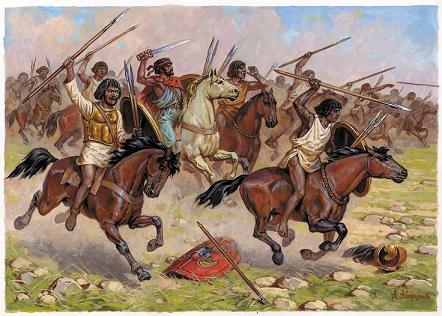