These Medieval Novgorodian Pirates were both early form forms of both “River” and “Land” Pirates and Bandits. They were seen in 10th Century AD Northern Russian  (The Russian Baltics). They adopted Norse (Viking) warfare tactics and similar Society. Noted for their unique Finnish designed Ships called “Uisk” (or “Snake Ships”), these were low draught vessels that present a very low profile. Lightweight, The Uisk could be physically carried by 8 to 12 Warriors over short land distances, from one point of water to another. These were also used on Coastal Raids (and not normally seen as deep water vessels). The Ushkuniks were so effective and ruthless Fighters, that many Novgovodian Nobility hired them as “Land Fighters”. Often larger Uisk Ships featuring wooden wheels were constructed and used as a mobile War Wagon or Landship. The Ushkuniks became so effective with their raids, that for a period all Trade on The Volga River was suspended. In 1360, they fought The “Golden Horde “ to a standstill. It would not be until 1391, that a rising Rus Empire would finally decimated the “Pirate Army” and their Culture. 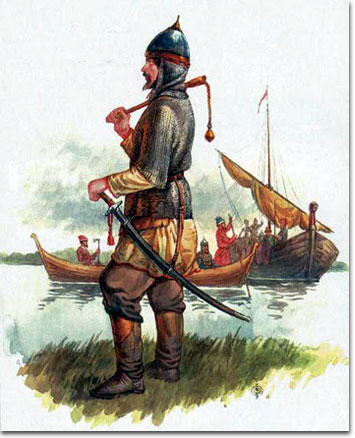