No single event (other than battle), was more important to a Viking in his life – than the Feast. Similar to most cultures which have celebratory functions, Vikings were no different. Often called by Royalty or Nobility, it was sponsored for victory in battle and war. Often used to celebrate a particular Norse God (with regards to hunting, fishing and farming) – it was in essence, a party. One had to wear their finest clothes and jewelry was definitely a must (even among men). While weapons were usually a “party favor”, singled out warriors were known to show up bedecked in all their weapons of war. Food and drink was normally provided by The Host of the Feast. They would provide more “richer foods” than the average Norseman or woman would get. All came. The Old, Babies, everyone. To NOT show up at a Feast was a big taboo.

Many times, simple gifts would be given – as were “contests” for strength, courage, etc. Winter times were common for more than one Feast (owing to the clever attempt at distracting one's people from the painfully cold climate of the Viking lands). Held in “Long Halls”, or “Mead Halls”, a typical Longhouse could hold up to 250 people (sometime many more). These structures were not used for any other function. They would be decorated brightly with clothes hung from the normally stark and barren walls to soft and comfortable throw pillows for more honored guests. Often “blood offerings” or related rituals would be performed by Village Priests to satisfy The Gods. 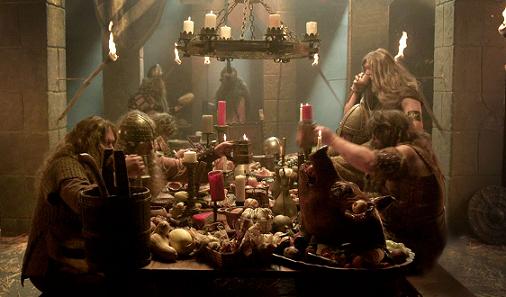