The diet of Viking Age Scandinavians was based on fish, meat, dairy products and cereals. A wide variety of meat was consumed – beef and veal, horsemeat, pork, mutton and lamb, goat and goose. In some Regions, Venison, seal and whalemeat – as well as game birds were more to palate. Mostly boiled or stewed in large iron cauldrons, sometimes large water-filled pits with heated stones thrown in served as well. Another method was to immerse red-hot iron pokers into water (to super heat same). Another form for some was grill-spit cooked (gridiron or spit – over a fire). Herbs would be added, such as juniper berries cumin, mustard, horseradish and garlic.

Cooked blood was stuffed inside an animal carcass to enhance flavor while cooking as well. Intestines (cleaned out and stuffed with various meats) were made. These were the forerunner to today's sausage. Fish and meat were also sometimes dried out or cured to make them last longer in storage (or through the cold Winter months). Butter and cheese was starting at this time, but it was more flavorful to “drink” these in their semi curd form. Oats (separated and made into primitive flat breads) were eaten in some areas. Actual European Middle Ages ovens were not heard of. Flat breads were “pan fried”. Although vegetables existed (onions cabbage etc) – they were not consumed with any regularity. Both breads and vegetables were considered a diet for Nobility. Of course, life centered around a Village's “Mead Hall”. Malted barley was used to brew ale which was consumed in LARGE quantities (as a beer). And of course, the staple “Mead”, was produced from honey .

Wines were very uncommon (unless procured from a raid). They would be used by Nobility as well. Fruits were not all uncommon. When in season, a Viking and his family might eat apples and various types of nuts. Generally, a Viking eat twice a day. An “early morning” meal – and a “late day” meal. Tableware was basic (but did exist). Normally rounded wooded serving platters were called into use, as were soup bowls (also wooden). A type of wooden (or bone) spoon would have been seen, but most often simply picking up the bowl and “slurping” it was the order of the day.

Meat was cut with a knife (general purpose – no “special type” or “reserved type” was known yet). Most Vikings used wooden cups to drink. Royalty and Nobility would have imported glassware to use (often made of gold or silver). Most of these were horned shaped and not designed to be placed down to rest (as a modern form is). Generally, one had to start drinking (and finish it all) – in several swallows!. 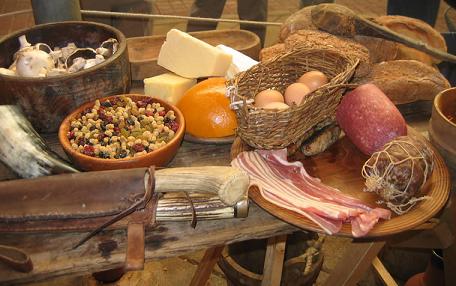